Self-discipline and Social Commitment; a clear mind and lofty ambitions.

Study hard, pursue truth and behave sincerely, with a strong and broad mind; to create a harmonious atmosphere of respect for teachers and love for students;

To cultivate moral character and professional dedication. To be benevolent and rigorous; to enlighten, guide and promote the traditional culture.

To train diligently and persistently; to improve both mental and physical capabilities.

5. The Concept of Kung fu (Gongfu in Chinese)

Chinese martial arts is a traditional Chinese gymnastics, which emphasizes cultivating internal and external strength. Its main concepts are movements that have an art of attack and defense, and one trains in forms (rehearsed routines) and combat. Wu Shu refers to bare-handed and weaponed combat techniques of attack and defense and the practice of single moves from forms. These are composed of many actions, e.g. kicking, punching, wrestling, catching, falling, hitting, chopping and stabbing according to the certain rules. Chinese martial arts was developed by many people over the years and is a valuable part of our cultural heritage that Chinese people have accumulated and enriched over the years.

For Chinese kung fu, benevolence, morality, and righteousness are essential. Chinese martial arts can be divided into three parts:

.First, it can build the body, which refers to physical fitness and health care.

.Second, it can strengthen the mind, which is a more philosophical concept; martial arts can sharpen the mind, enhance perseverance, and break through personal limits. The martial artist should pursue the study of the changing laws of the universe and be humble. He or she should endeavor not to compete in the achievement of martial arts, but rather pursue a supreme state in order to break through secular thoughts and become one with nature. Chinese martial arts fuse the core ideas of Confucianism, Taoism and Buddhism.

.The third part learned in Shaolin kung fu school is combat, which plays a very important role in the Chinese Martial arts. However, combat comes last. Our Chinese ancestors didn't like to use force to solve problems; people fought only in life-death situations.

Chinese martial art plays an important role in traditional culture. It is the Chinese national sport as well as a way to practice physical exercise and self-defense. It was named as Kung Fu in Guangzhou province and “Guo Shu.” It is often called “Guo Cui” (treasure in the national culture and arts) because it is the essence of Chinese traditional culture.

In practice, lots of important functions are learned, such as sports, fitness, chi gong, and health care. In theory, a rich experience and form records are preserved. The movements one learns are forms and sparring, which reflect the Chinese people's understanding of offensive and defensive combat and strategy. However, it specifically aims at independence, self-improvement, and preserving health. Forms include boxing, broadsword, spear, sword, staff, etc. Form performances should show graceful body posture and movements. Typically, the cultural features of Chinese martial arts help people purify their minds, explore the truth of life, and appreciate the significance of the human philosophy, as well as make a great effect on the current Chinese popular culture. 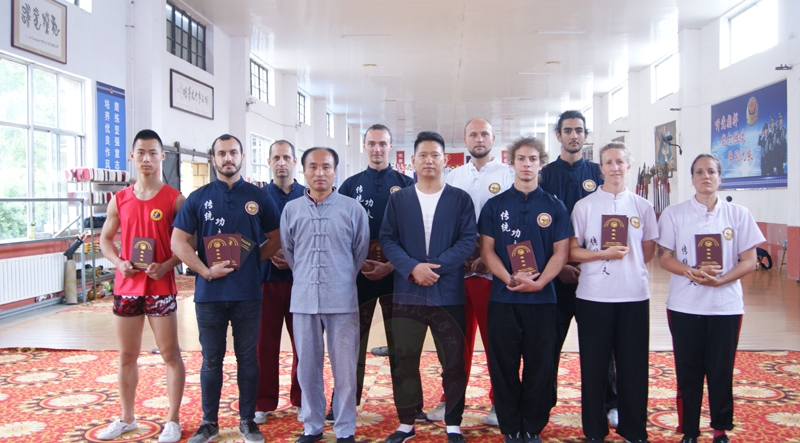 （1）Loyalty, which means being loyal to your country, nation and faith.

（2）Humanity, which means to deal with everything with broad love.

（3）Sincerity, which means honesty and reliability as well as keeping promise.

（4）Righteousness, which refers to fairness, integrity of behavior; and the methods, ways and standards that act in accordance with human beings’ demands. It emphasizes the fact that people must obey certain norms and standards; "Righteousness" is a fundamental prerequisite of good behaviors.

（6）Rites, which means respect for others, humility and upholding hospitality etiquette to others. It includes manners, etiquette, ceremony, appearance and so on.

（7）Wisdom, which refers to both counsel and wisdom. It is the ability to distinguish and judge right from wrong and good from evil. “A wise man is intelligent and knows ethics."

（8）Integrity, which requires the martial artist to be neither overbearing nor servile as well as neither a flattering personage nor bully of the weak.

(2) Promote the martial arts with the priority of morality;

(4) Strengthen physical health, to be good at civil and military affairs;

(5) Obey the laws and disciplines and fight for justice;

(6) Advocate science, in order to be practical and innovative;

(7) Be conscientious and meticulous in work, study diligently and train hard;

(8) Be united, modest and discreet;

(9) Be honest and sincere to achieve the unity of knowing and doing;

(10) Have an upright appearance and to show politeness to everyone;

(3) No propaganda of pseudoscience, no superstitious activities;

(4) No discrimination due to race or color;

(5) No frivolity, no gambling,and no drugs;

(6) No fighting; people who are strong shouldn’t bully those who are weak;

(7) Don’t stir things up or destroy the unity;

(8) Don’t accumulate money in an illegal way or care only for money;

(10) Don’t be arrogant or egocentric, be polite.