The ranking system at Shaolin Temple has 9 levels. The ninth level is the highest someone can achieve in Shaolin Gong Fu. The level can only be awarded after a lifetime of commitment to it. However, if you are determined enough and willing to study for 3 years, you can attain a middle rank of either level three or four.

Masters (Shifu) listed below are traditional Kung Fu masters skilled in the ancient art of Chinese martial arts and historical theory and philosophy: 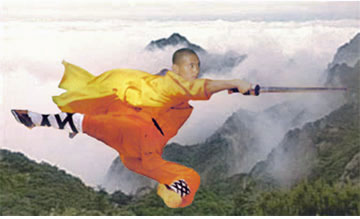 32nd generation Shaolin warrior monk. He started studying in the original Shaolin Temple at age 7 and learned kung fu there for eleven years there. He is skilled at teaching traditional Shaolin kung fu and other combat practices. Headmaster specializes in Chi Kung, Yi Jin Jing, Tai Chi and more. He has about 8 years of teaching experience in these disciplines. He also specializes in Shaolin traditional Chuan and Shaolin combat techniques, Chi Kung, Yi Jin Jing, leopard fist and internal kung fu, Xing Yi, Ba Gua Palm, and Tai Chi. He has been studying extensively on Chen style Tai Chi for the past ten years. In 1997, Master Qing was sent to help the Chinese government with the restoration of the Southern Shaolin Monastery. After that, Qing traveled all over the world in order to share knowledge with various different styles masters globally and teach Chinese Kung Fu. In the 1st China Shaolin Kung Fu competition, he took first place in Shaolin broadsword and sword forms. In the National Martial Arts Tournament of 1995 year, he won the championship in the 70kg open combat categories that competitors allowed to fight with the style of their choice. In 1996, Qing won the championship in the 75kg open fighting categories and took first place in Shaolin Leopard form in a Chinese martial arts competition held by Liaoning province. He also took part in many other competitions and got great records..In April 2012,he was awarded the 24th-generation descendant of Chinese most famous Bing Jia Secret Skills Senior Internal kung fu by Jin Gang Li Gong federation.In Oct 2016,he achieved 12th-generation descendant of Chinese Chen Style Tai Chi Chuan. Headmaster is awarded "Famous Master in Shaolin Martial Arts"  by Henan Dengfeng Shaolin Federation in 2017 Year.

Besides these achievements, he is Administrative Vice President of the Kunyu Mountain Cultural Research Federation and Vice Managing Deputy President of the Yantai City Martial Arts Association and Deputy of the National People’s Congress of Yantai.

Master Guo:Wing chun, Baji, Chi kung master, Ranked at level 8.Coming from a traditional Chinese kung fu family. He has been teaching Chinese martial arts for 28 years and practicing for over 33 years. With strong morals and a friendly personality, he's excellent at Wing chun, Baji, Wudang, Shaolin internal strength finger, war sword, black dragon, big pole & nunchaku. He also has Chin’na unique skills. He professionalize in the release of the inner strength that is essential in creating a skillful defense and attack. Guo is the successor of the famous traditional internal subject who has managed to successfully break the flagstone half placed on a block of bean curd, which has been documented extensively by the media. Due to a deep understanding in the activity, he created his own Chi Kung styles, which has successfully been listed in National Martial Arts Committee. He is a long participant of the domestic and global martial arts competitions, and Guo has gained a huge reputation and won many prizes.  He won second place in the 1993 Chi Kung and martial arts competition by leg power. In 1994, he attended the oriental health exposition opening ceremony and was awarded a Special Contribution Award. At the same time, he was also invited to Japan for academic exchanges and to teach Kung Fu.

In 1995, he won first place in the Exchange performance Sino-Japan Chi Kung Plus Martial Arts Congress, which were held in Dalian.  He was later sent by the Chinese Martial Arts Managing Center in 1997 to visit Algeria and provide a kung fu performance with a delegation Chinese martial arts performance group.  In 2005, he reached the height of Kung Fu competitions when he scored first in the inner strength national competitions. In April 2012, Master Guo are awarded 24th-generation descendant of Chinese most famous Bing Jia Secret Skills Senior Internal kung fu by Jin Gang Li Gong association.He is vice secretary-general of Kunyu mountain cultural research association.

34th generation monk of Song Mountain Shaolin Temple. At the temple, he learned traditional Shaolin Gong Fu for 12 years. He is currently ranked at level 7 and has many years' experience teaching Kung fu to foreigners and natives. Master Po is especially skilled in traditional Shaolin martial arts forms and applications and combat as well as Pray mantis Boxing and Taichi.

In addition to rich teaching experiences, he has participated in many international performances. Among other performances, he participated in Shaolin monk demonstration in England, America, and France in 1993. It was at this period that he also taught Chinese Shaolin kung fu to foreign students.During the 3rd national Shaolin competition, he was crowned the winner for Shaolin Luo Han. He was also leading in his staff routine and ranked second for his sword routine.

In his early teenage years, he won the top prize in Shaolin fist, spear and Da Mo sword form at the teenager Martial Arts competition held in the He'nan province. During the International Traditional Martial Arts competitions 2011 held in Yantai, Master Yan Bo achieved  1st position in Shaolin Spear. It was a double win for him in the even that took place on July 24 and August 8 that year. In the September 2015 “Fujing Agriculture Cup” of the International Martial arts Championship of Qingdao city, he received first place in Mantis boxing and double hands sword. In the 2016 traditional Martial Arts competition held by Yantai in August, he achieved first place in Tai Chi, plum blossom Mantis, and Mantis Zhai Yao Yi Lu respectively.

34th Shaolin warrior monks. He started to study Sanda plus traditional Chinese Kung Fu at Shaolin Monastery at a very young age. During his study, he earned many championships of various Shaolin Chuan and kickboxing competitions. He's very skilled in traditional shaolin kung fu Chuan and its applications and Sanda. He is also an expert with different shaolin weapons, including the spear and sword, spear and staff, Chi kung, and many others.

In 2006 at the International Shaolin Martial Art Festival held at the city of Zhengzhou, he received first place. Two years later in 2008, he participated in shaolin performance in a Xin Zheng ancestry big ceremony successfully. The following year in 2009, Cheng got again a first place in 56kg combat categories at a kickboxing competition that had been held at the city of Dengfeng of Henan province. Yan Cheng has been a shaolin martial arts master at one of the biggest kung fu schools that taught kung fu since 2010.

Shi Heng Peng,Disciple of Shaolin temple, who studied Kung Fu at an early age, was diligent and talented in Chinese martial arts. Graduated from Kunyu mountain Traditional martial arts academy,he studied the theory of the application of martial arts assiduously and participated in many martial arts competitions during his studying in academy, and achieved excellent results. He is exceptional at various traditional shaolin forms, Shaolin boxing, Luo Han Chuan, Xiaohong Chuan, Dahong Chuan, Mantis boxing and Shaolin weapons, Shaolin sword, stick and so on.  The honors of the competition are as follows:

At the age of 6, Began to learn martial arts for more than ten years. During this period, he also practiced Savott in France for about two years. After studying for a degree in  university, in 2011, he followed Master Guo in Shaolin martial arts academy of Kunyu Mountain for 8 years to study traditional Wing Chun, Baji and Chi Kung with dedication, as well as natural talent for studying ,he became Master Guo’s formal disciple . During the learning period, he participated in many domestic and foreign Martial arts competitions and achieved excellent results. Highly skilled at: Wing Chun and Baji Chuan.

Master Sui, professional doctor,third generation of Great ancient Master of AN ChunRu.Sui is a traditional Massage  and Chi kung Master who has been working here as full time master for 5 years up to now.

He touched the Chinese medicine and ancient massage skills at a very young age.At the age of 18,he had been further studying with Sui Zhuo Qin for eight years,who is a great massage master.He also combined with Taoism Chi kung during the healing others,which works quite well.

He focus on the developing the unique skills on that and combine the ancient massage and Medical theory as well as keeping the balance of yin and Yang.

Master Sui is highly skilled on healing ancient master combined with Mastering Chinese medicine works as well as all sorts of Medical works,which hundreds of people benefited them a lot and got healed and cured..

Professional in Chinese traditional culture and Kunyu Mountain Taoist culture research.Mr.Liu has a comprehensive and systematic study in Chinese Confucianism, Buddhism and Taoist culture , especially in the Kunyu Mountain area where our school is located, with more than 10 years of on-the-spot investigation and follow-up research results,which has published more than 10 research monographs.

In the course of teaching Taoist culture in our school, Mr. Liu has accumulated abundant teaching experience. In the teaching process, He uses outdoor on-the-spot explanation as the main method, while indoor theoretical study as the supplementary method. Based on the on-the-spot real objects, with vivid and interesting historical knowledge and legendary stories as the content, the students can understand it very well.

Experiencing the feeling of immersion, deepen students' understanding of Chinese culture and Kunyu Mountain Taoism, experience the vastness and uniqueness of Chinese culture, this kind of teaching has been very welcomed by students.